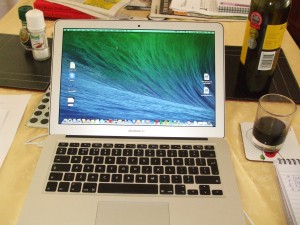 When I heard that Microsoft was no longer supporting Windows XP, I checked my options. These consisted of upgrading to W7 or W8 or scrapping my desktop (name of Henry) and buying something else.

I checked the upgrade options and they looked too complicated and too uncertain to me, so I decided to buy a new computer.

After much deliberation and much discussion with friends and relatives, I bought an Apple Mac Air together with a copy of MS-Office for mac. The package cost my a little over 1,200 euro – about twice what I would have paid for a windows PC. I know I’ll be climbing a steep learning curve with the mac, but what the heck. You’re only young once.

I ordered it on Monday April 7. It arrived on Wednesday April 9. The packaging was superb – so superb that I decided not to recycle it, but to keep it under my desk. I expect I’ll take it out once in a while to examine and marvel at it.

The mac found my wireless broadband router all by itself. I entered the password and got connected, not just to the Internet, but to Henry, my desktop, which sports a shared data area on its hard disk.

I was then presented with a “Voice Over” speaking guide to the mac, which I went through from start to finish. It uses Voice-Over keys or VO keys. You hold down ctrl and alt to activate these keys. VO-W for example says “Double u”, VO-; says “semicolon”. I’m not at all sure what was the point of this exercise, although I suppose it might be useful to a blind person. If I had been asked what I thought of the VO experience I would have said “needs work”. The VO session provided practice at keyboard entry and navigation. I ran into a problem there, trying to enter a date. I keyed in 4 for April, but couldn’t get the darn thing to move on beyond the / to key in the day.

I then tried to register the computer and hit my first major problem. I keyed in my name and carriage-return. The mac didn’t like this. I tried everything I could think of to move on to the next field, but, as with the date input practice, nothing worked. I called Apple support and they suggested using tab. Silly me. I’m so used to using carriage-return (also called ‘enter’). Anyway, I managed to register the computer together with a password, and set up an email account (with another password).

My next job was to download MS-Office. My delivery included a small yellow box containing a product key and instructions for downloading the software. I connected to the website, set up a Microsoft account (yet another password) and started the download. I had to call Apple support again, as the suggested website for the download was not correct. The download took the best part of two hours, and after that I still had to download a further two upgrades that took another 30-45 minutes before I got to install MS-Office. My broadband connection runs at about 7Mbytes, btw.

I then spent some time trying to get the keypad to do various things. First, there was no obvious place to click or right-click. The computer came with a small paper guide to using the keypad. I read that. It seems the entire pad is clickable. I tried tapping it, as I’d seen my wife tapping her iPad. That didn’t work. Sometimes my efforts at clicking worked, but not always, so I called Apple support. They told me to push, not tap, on the pad and I should hear a click.

I quickly discovered that there is no delete key on the keyboard. There is a backspace, but where the delete key should be, Apple has located the on/off button. Made a mental note not to expect to find a delete key up there. My friend informed me that Fn-backspace works as a delete key.

The keyboard is odd – different. The @ key is above the 2 where I expected to find the double quote. The (hash) key is above the 3 beside the £. I’m used to finding the (hash) key over on the right-hand side somewhere. I haven’t found out how to operate the (hash) key yet. The same goes for the (euro) symbol which sits above the 2 with the @. I’ve tried all sorts of combinations of shift, alt, ctrl etc. Nothing works. There’s a strange-looking key to the left of the 1. It is labeled with two strange cabalistic symbols that I know I’ll never use: § and ±

The function keys are all marked with strange hieroglyphics, and there’s this extra cmd key.

That was day 1. I spoke with five Apple support people: one in Greece, two in the UK, one in Cork and one in Romania – all very helpful, very patient.