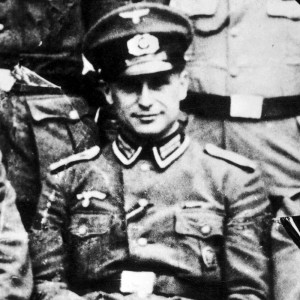 ‘The Butcher of Lyon’ was leader of the Gestapo in the Lyon area 1942–1944 holding the rank of SS-Hauptsturmführer (captain). He captured and personally tortured hundreds of French Resistance workers, including Jean Moulin a highly ranked resistance leader. Witnesses to his torture methods show a sadistic monster who used the most unspeakable methods. He hung his prisoners from their ankles and some he skinned alive. He tortured Moulin and many, many others to death.

Barbie is thought to have been directly responsible for the deaths of up to 14,000 people, men, women and children.

After the war he was tried in absentia by the French for war crimes and sentenced to death. When the French discovered that he was being held by the US authorities in Germany, they demanded that he be turned over for execution. The Americans refused to hand him over and helped him to escaped to Bolivia under the name Klaus Altmann.

Following the fall of the Bolivian dictator, Hugo Banzer Suárez, Barbie was finally extradited to France, in 1980, to face trial on 41 counts of crimes against humanity. When faced with some of his 730 accusers during his trial, he responded: “nothing to say”. He was convicted, sentenced to life imprisonment and died in prison of multiple cancers in 1991.

‘The Butcher of Lyon’ makes an appearance in my next WW2 thriller, A Postcard from Hamburg now available for pre-order for Amazon kindle