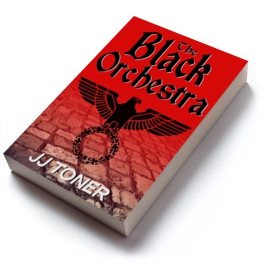 WW2 Germany. The German war machine has invaded Poland and is advancing west toward France. In Berlin Kurt Müller, an Abwehr signalman, discovers a colleague lying dead at his radio receiver. The criminal police dismiss the death as suicide, but Kurt is not convinced. Kurt follows a trail of mysteries, witnessing several atrocities that expose the Nazi regime for what it truly is. When the trail leads him to the German resistance, he faces the most difficult choices of his life. He must choose between his duty and his conscience, between his country and his family, between love and death.

Kriminalinspektor Glasser of the Berlin KRIPO was the thinnest man I had ever seen. Cheekbones as sharp as blades underlined his sunken eyes. His fingers rested on the table in front of him – two bundles of knuckle and bone barely held together with skin.

“You are Kurt Müller?”

“You discovered the body?”

I was still shaking from shock. I tried to compose myself. “Yes. This evening when I came on shift. I signed in at seven forty. Allowing ten minutes to climb four flights of stairs…”

Sitting to Glasser’s right, my supervisor, Drobol the cripple chipped in, “Müller’s shift started at eight.”

The room was small and bare – a table, three chairs, a barred window. On the table, nothing but a black telephone. The fingers of Glasser’s right hand began to drum on the edge of the table, like a piano player running up and down the scales.

“Kleister was lying on the bench in front of the radio transmitter at station five. There was a small hole in his head, here,” – I pointed – “just behind his headphones.” I had seen black brain matter on the desk, but very little blood. My stomach heaved at the memory.

“And the gun?” The fingers paused.

“In his hand.” There had been a stench of cordite.

“Did you touch anything? The body? The gun, perhaps?”

Glasser was dressed in a dark blue gabardine overcoat and still wore his hat, a homburg. He looked like a man with an urgent appointment elsewhere. He pushed his hat-brim back and leaned forward, placing the points of his elbows carefully on the table. “How well did you know this man?”

I writhed under the intense glare of the two men facing me. Surely they couldn’t suspect that I had something to do with Kleister’s death?