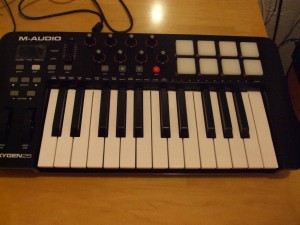 Recently I discovered a composer/sound engineer working in my town and asked him to create a musical track for video trailers for my books. He did a great job. But when I saw the equipment and the Digital Audio Workstation (DAW) software he was using I just had to get my hands on it.

It’s just what I need, of course – a new hobby.

Anyway, I ordered a MIDI 25-key system. My friend recommended the DAW Cubase, so I ordered that online on a Saturday. What I ordered was Cubase 7.5 (cost €599) and a dongle (€32) that would allow me to run the software on more than one computer. I then discovered Cubase 7 Elements, a reduced version of the software, costing just €99 that I thought would be a better buy for a beginner like me.

I sent an email to the company to cancel my order, but by the time they read my message on Monday morning, the warehouse had already shipped the item. They suggested I should “refuse the acceptance” i.e. refuse to accept the item when it arrived at my door.

A few days later, a courier van arrived with a small package. “Sign here,” said the driver. This package could have been the software that I needed to return or the dongle. The driver refused to let me open the package without first signing for it. The package was so small, I was sure it must be the dongle, so I signed for it. The van drove away. By the time I’d discovered my mistake it was a cloud of dust in the distance.

I sent an email to the warehouse asking them what I should do next.

In the meantime, a second courier van arrived with a much smaller package containing the dongle. I signed for that and told the driver what had happened just 2 hours earlier. He offered to take the first package back to their warehouse and return it to Germany. I gave it to him.

A few hours later I received an email reply from the German warehouse. They gave me the address of their warehouse and added:

“You can only send a unopened article back. If the article is open you must send us first the serial number from the article.”

I rang DHL and after a brief conversation discovered that both packages had been delivered by UPS. I got on to UPS and they went looking for the package. They found it and redelivered it to me. I sent the serial number (and several other numbers) by email to the German warehouse and asked then for further instructions. Their response was:

“Thank you for contacting Customer Service.

“We sent you the RMA instructions separate.”

I was a bit puzzled by this curt response. They seemed to be telling me that I had all the information I needed. I had sent them the serial number and I had the address of the warehouse. So I posted the item to their warehouse, sending it by registered post. That was on September 23, 6 days ago.

Today, while checking an old email address that I don’t use very often, I discovered an email from the German warehouse with a PDF form attached, called a Return Materials Authorization (RMA). This includes a RMA number, which apparently is a vital part of their return procedures.

I’ve sent them an email.

Sign up to be notified of JJ Toner’s future articles
2069 Total Views 1 Views Today
Short Stories for a Song
The Kerry Babies - How a Murder Squad Lost the Plot
Posted in ALL, NEWS and tagged hobbies, midi, warehousing confusion.