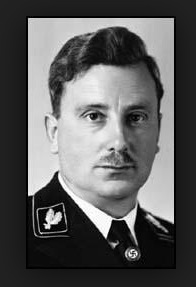 The Nazi Party, the NSDAP, was formally established in 1920, and soon afterwards, they set up a paramilitary force, led by a close associate of Hitler’s called Emile Maurice. This force soon evolved into the notorious and brutal Sturmabteilung (SA) led by Ernst Röhm.

Early in 1923 the Stabswache (staff guard) was established as a personal bodyguard for Adolf Hitler. This was a small inner circle of 8 men from the SA under the leadership of Julius Schreck. Emile Maurice was a member.

The Munich Beer Hall Putsch of November 1923 followed. This was an attempt by the nascent Nazi Party to seize power from the government of Bavaria. 2,000 armed members of the SA stormed a beer hall where State Commissioner Gustav von Kahr was delivering a speech. The putsch was a failure, but before it came to an end four policemen and sixteen Nazis were killed in an exchange of gunfire. During the battle a Nazi flag became bloodstained, and this flag later became the basis for the famous blutfahne (bloodflag) used in Nazi ceremonies.

The leaders of the putsch were arrested and charged with treason. Adolf Hitler, Rudolf Hess, Emile Maurice, Julius Schreck, Erich Kempka and others were convicted and given prison terms. Hitler served 9 months of his 5-year prison sentence, using the time to write his book Mein Kampf with the help of Rudolf Hess and Emile Maurice.

In 1925 a new personal bodyguard for Hitler was formed. The Schutzkommando (protection command) under Julius Schreck; Emile Maurice became Hitler’s chauffeur at that point.

Hitler was besotted with his half-niece, Angela (Geli) Raubal, who, in 1929, moved in to live with him in his Munich apartment at Prinzregentenplatz 16. She was 21 at the time. Hitler was 40.

In September, 1931, Geli was found dead in the apartment. She had been shot by a single bullet to the heart. A suicide verdict was arrived at. Accused of having an affair with Geli, Emile Maurice was sacked and Julius Schreck became Hitler’s chauffeur (complete with matching moustache!).

Hitler became Chancellor of Germany in January 1933, and when Schreck died of an illness in 1934, Erich Kempka took over as chauffeur. Kempka held the job until Hitler’s death in 1945, and was partly responsible for burning the bodies of Hitler and Eva Braun after their joint suicide.

The Schutzkommando grew quickly to become the Schutzstaffel (SS). Maurice was SS member number 2; Schreck had SS number 5. Heinrich Himmler took over the leadership of the SS in 1929. By the end of the War, when it was dissolved, it numbered 1.25 million men.

The SA was eliminated as a force on the Night of the Long Knives, July 1, 1934, when Ersnt Röhm and most of its leaders were killed by the Gestapo.

Emile Maurice died in 1972 at the age of 75. Erich Kempka was 64 when he died in 1975. He wrote a book called I Cremated Adolf Hitler, published 1951. An English edition of the book was published in 2010 under the title I was Hitler’s Chauffeur: The Memoirs of Erich Kempka

Watch out for my short story ZUGZWANG featuring Maurice and Schreck.