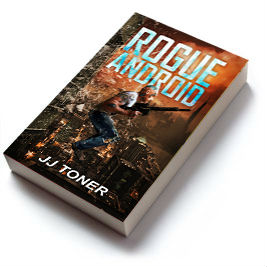 Dr. Hillman strode into the laboratory at Xenodyne Automation. “What are you working on, Dirk?”

Dirk Tyrell looked up, removed his eyepiece. “The reflex speeds on the solenoids. You asked me—”

“Right, well we’re going to have to interrupt that work. There’s been a snafu with an AU on Sanfran2. I’ve received a message from the customer, Valadine Enterprises. They’ll arrange to have you collected from the Terminal Gate when you arrive.”

Dirk put down his soldering iron. “I’ve never been further than the B-System.”

“Do we know the nature of the problem?”

“I have no information on that, Dirk, but it sounds pretty serious. The message calls it a ‘catastrophic failure’ of one of our Units.”

“How long will the job take? I have commitments at the university, an optometrist appointment, fresh protein blocks in the fridge.”

“You’ll have a better idea when you get there and see the problem firsthand, but the trip shouldn’t take any longer than two standard weeks. Professor Quinn will look after your tutorials and lectures, and I’ll make sure your fridge is filled with all the compressed protein and vegetable paste you can eat when you get back.” He took a step toward the door. “Better get on home and pack a bag. I’ve booked you on a freighter leaving in three hours, and I’ve arranged for a driver to pick you up in one.”

Dirk unplugged his soldering iron, sprinted to the rail-link terminal, and stepped aboard a southbound hover. He called his man on his X-vid. “I’m on my way home, Travers. I have to go away for a couple of weeks. Pack a bag for me. Do you understand?”

The slight delay was annoying. Even an enhanced Mark 2 Unit like Travers took a second or two to process dialog. “Pack a bag. I understand. You have an appointment with the optometrist next week. Should I cancel that?”

“Okay. I will heat your meal.”

“I won’t have time for that, Travers. Dispose of it, okay?”

Dirk knew it was his overactive imagination, but sometimes Travers looked and sounded like a truculent teenager...