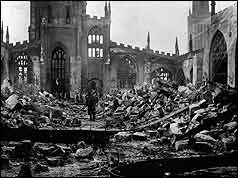 The German blitz of London began on September 7, 1940 and continued for 57 consecutive nights. The blitz ended in May 1941, although 1944 saw the introduction of the V1 “doodlebug” and the V2 rocket directed at London from Peenemunde. More than 1 million London homes were destroyed or damaged, and over 20,000 London civilians were killed during the blitz. Other cities, such as Liverpool (4,000 deaths) and Hull (1,200) were also heavily bombed during the early War years.

Coventry was bombed many times during 1940, culminating in the most devastating raid on November 14, 1940. Approximately 500 Luftwaffe aircraft dropped incendiary devices and high explosives, creating a firestorm that levelled the city, killing around 550 with about 900 seriously injured. During all these raids, the last of which was in August 1942, an estimated 1,200 people were killed.

The November 1940 raid on Coventry gave the British Government the justification it needed to launch bombing raids on German centres of population and to employ incendiary devices of its own. The first of these was a raid on Mannheim in December, 1940. The most destructive were later raids on Hamburg and Dresden.

Two of many raids on Hamburg, each involving over 600 Allied bombers were carried out on July 23 and July 27, 1943. The dry weather and high winds helped to cause firestorms that consumed the entire city. The loss of life was horrendous; the majority of those who sheltered in the basements of their houses died from carbon monoxide poisoning. The firestorm was so intense that it removed all the oxygen, creating a vacuum that sucked fleeing people into the flames. These raids killed an estimated 42,000 civilians and injured 37,000. Over a million were made homeless.

Several raids on Dresden in February, 1945 destroyed that city at a time when the war was reaching its inevitable conclusion. These raids employed 1,200 Allied bombers, dropping 3,900 tons of high explosives and incendiaries that created a firestorm and killed an estimated 25,000 people.

In comparison, the nuclear bombs dropped on Hiroshima and Nagasaki in June 1945 killed at least 129,000.

My new WW2 spy story, A Postcard from Hamburg, features one of the bombing raids on Hamburg.

A Postcard from Hamburg is on pre-order for Amazon kindle, here