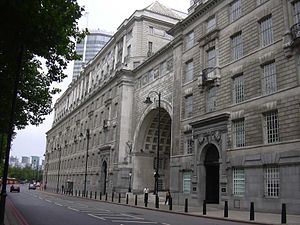 Before the outbreak of World War I, the British Security Service consisted of two sections responsible, respectively, for home and overseas operations. The home section became known as Military Intelligence Section 5 (or MI5). MI5’s main functions were the identification and arrest of foreign agents from Germany and (later) the Soviet Union and the monitoring of pacifist organisations and trade unions.

After WWI, MI5’s budget was slashed and the organisation reduced from 800 to just 12 officers. At the same time, Sir Basil Thomson of Special Branch was appointed as supreme commander of all domestic intelligence. During this period, MI5 undertook the training of 175 British Army Officers for service in Ireland in an intelligence unit designated the “Dublin District Special Branch” (DDSB).

The IRA quickly penetrated the unit, and, on Sunday November 21, 1920, 25 of these agents were assassinated. As retaliation for this attack, the British Army and the Black and Tans opened fire at a Gaelic football match in Croke Park, killing 13 spectators and one player.

In the following year Sir Basil Thomson was sacked, his “Home Intelligence Directorate” abolished, and MI5 re-established. It was at this point that the Soviets began to recruit “sleeper” agents from within Britain, the most successful of these agents being Kim Philby, Donald Maclean, Guy Burgess, Anthony Blunt and John Cairncross –– the Cambridge Five.

MI5’s principal task at the outbreak of WW2 was the identification of enemy agents in Britain. With the ending of the Battle of Britain and the abandonment of invasion plans (Germany’s Operation Sealion), MI5 was able to build on its major wartime success — recruiting and “turning” enemy agents — the so-called “double-cross” system.

Beginning with an enemy agent codenamed Snow, MI5 began to transmit bogus “intelligence” back to the German secret service. The system was extraordinarily successful, playing a major part in the massive campaign of deception which preceded the D-Day landings.

Ben Macintyre (2102). Double Cross: The Story of the D-Day Spies