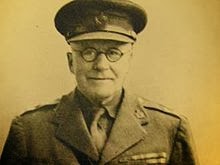 Alexander Scotland was born in 1882 of Scottish parents. He spent a lot of his early life as a retail trader in southern Africa. As most of his customers were European residents of German South West Africa (Now Namibia), Scotland became a fluent German speaker.
He served with the British army during the First World War, fulfilling various roles in intelligence suited to his language skills.
During the Second World War he was appointed head of MI19, responsible for the interrogation of German prisoners of war. MI19 operated out of a number of houses, called ‘Cages’ located in various locations in the UK. The London Cage was located in the fashionable Kensington Palace Gardens.
There were allegations of torture, never fully substantiated or discounted. Prisoners were said to have been forced to stand at attention for 26 hours without the benefit of toilet breaks, to have been stripped, kicked, beaten, starved, and threatened with execution or unnecessary surgery. Interrogation officers were said to have dressed in KGB uniforms as the Germans were terrified of the Russians.
In 1947, Scotland gave evidence at the trial of 18 Nazis accused of the massacre of 50 British prisoners of war who escaped from Stalag Luft III in a 1944 escapade that was later celebrated in the film “The Great Escape”. The 18 defendants alleged torture while in The London Cage by starvation and electric shock, allegations vigorously denied by Scotland.
After the war The London Cage became the headquarters of the War Crimes Investigation Unit. One of those confined and interrogated there by Scotland and his team, was Fritz Knoechlein, who was tried and convicted of the murder of 100 British prisoners in France in 1940. Knoechlein was hanged for his crime in 1949.
Alexander Scotland wrote a memoir called The London Cage which was published in expurgated form in 1957 after a seven year wrangle with the British Foreign Office. Knoechlein also wrote and published a short (12 page) account of his treatment in The Cage.
The London Cage features in my new WW2 spy story, The Wings of the Eagle
Source: Wikipedia
Sign up to be notified of JJ Toner’s future articles
2319 Total Views 1 Views Today
The Wings of the Eagle
WW2 - Lidice
Posted in ALL, WW2.