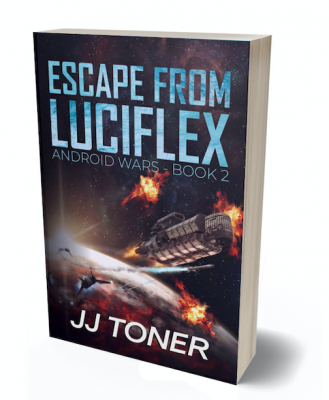 Banished to prison 320 lightyears from Earth, android engineer Carla Scott plans her escape. But it won’t be easy; Luciflex is a volcanic hellhole, a mining colony run by armed human and android guards.

Ever since the unprovoked attack on the Spaceport at LAX, tensions have been simmering between the superpowers. When the Northers assemble a battle fleet, all-out war threatens to break out.

With the help of three fellow prisoners and a friendly android, Carla attempts her escape, but she will need a miracle to get home to collect the software she will need and back again in time to prevent the android war.