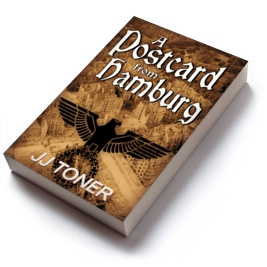 A WW2 spy story. 1943. Kurt is working for British Intelligence in London when his lover, Gudrun, is abducted by the SS. He must find his way to northern Germany where she is being held. Erika, meanwhile, pursues her own secret mission in Occupied France. The two stories merge in a dramatic climax that reveals the dirty tactics of Total War.

Kurt Müller ran his eyes over the contract before signing it. By this simple act he was transformed from an Oberleutnant in the Abwehr – the military intelligence service of the Third Reich – to a humble foot soldier in the British army, his pay 2 shillings per day.

Colonel Underwood handed him a second single-page document, headed ‘Official Secrets’. Kurt read it quickly, signed it, and handed it back.

“You are now an enlisted member of the Intelligence Corps in the service of His Majesty George VI. Congratulations,” said the colonel. He stood, holding out his hand.

Kurt stood, shook the colonel’s hand, and they both resumed their seats. “Could we talk about leave, Colonel? I was hoping to visit my girlfriend in Ireland. Her daughter’s birthday is in a few days.”

“Not possible, Müller, we have a most urgent mission for you. It shouldn’t take long, and after that you may have a few days’ leave.”

Kurt bit his tongue. He dearly wanted to make it back to Dublin for Anna’s tenth birthday, but there was no point arguing with the British army. He said, “I hope you’re not expecting me to return to Germany again, sir. I doubt that I’d make it out of there alive a third time.”

The colonel shook his head. “Nothing like that, Kurt. Our colleagues in counterintelligence have requested your assistance with their investigations. They run ah… an establishment not far from here where they interrogate subversives and suspected German spies…” He paused in mid-sentence, took off his spectacles and polished them with a handkerchief.

Bright sunlight pouring in through the high window behind the colonel made it impossible to read his expression. “What’s this establishment called?” Kurt asked.

“They call it Camp Twenty. It’s run by a Lieutenant Colonel Stephens.”

Kurt was not familiar with either name.

Underwood put his glasses back on his nose, tucking the metal arms behind his ears, one by one. “Unearthing Nazi spies is an uncertain business. Stephens needs our help – your help – to decide whether certain individuals who claim to be innocent civilians may actually be enemy agents. The hope is that you will be able to identify some of these from your time with the Abwehr.”

“But it’s a year since I worked in the Abwehr.”

“Quite. The colonel knows that, which is why he wants you to pose as a suspect and…”

“He wants me to spy on the other prisoners?”

“Not to put a fine point on it, yes. The plan is to send you in there as a suspect, let you mix with your countrymen, shake the bushes, so to speak, and see what comes tumbling out.”