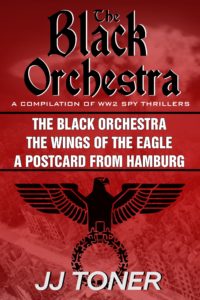 When Kurt, an Abwehr signalman in Berlin uncovers a conspiracy to undermine the Nazi regime, he must make some difficult choices.

The Wings of the Eagle

Parachuted into Germany to rescue Erika, an SOE agent, Kurt and Erika race to destroy the Nazis’ nuclear program.

A Postcard from Hamburg

When Kurt discovers that his lover, Gudrun, has been abducted by the SS and taken to Hamburg, he must abandon his British Intelligence work in London and move mountains to find her.