EGGS and Other Stories 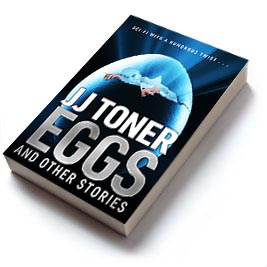 A collection of short stories for the Science Fiction connoisseur. If you’re looking for fun, surprises, and thought-provoking satire, read these stories. Originally published in 2011, this second edition contains 9 original stories and 4 flash fiction pieces released from my story vault, all written in the tradition of R. A. Lafferty, Robert Sheckley and Douglas Adams.

Paul D. Brazill: One of the things the best sort of speculative fiction can do is to satirize the absurdities of society and human behavior. In ‘EGGS and Other Stories’, JJ Toner does just that. And he does it marvelously well, too, with a style and wit worthy of a Kurt Vonnegut/ Groucho Marx double act.

Paul D Brazill is the author of Cold London Blues and The Last Laugh.

Les Edgerton: I HATE sci-fi. I LOVE JJ Toner’s sci-fi! If I’d read other science fiction created as Toner has with his collection, EGGS, I would never have considered making that first statement. This is just fun reading. It’s laugh-out-loud stuff but with a serious theme at its heart. His stories transcend genre and are just rockin’ good stories, evoking vestiges of O. Henry and the Twilight Zone television series… as translated by John Hodgson through his character Joel Robinson from his front row seat in the Peabody Award-winning Mystery Science Theater. Get this book and pass the word on to the rest of the kids in study hall.

Les Edgerton is the author of Hooked, Monday’s Meal, and the novels, A Perfect Crime, Just Like That, The Bitch, The Rapist, The Genuine, Imitation, Plastic Kidnapping and Bomb! He’s also a writing coach who helps kidnappers perfect their notes.

Feeling irritable and bloated, Professor Karl Brown sat hunched at his desk in his shorts and shirtsleeves. The air conditioning unit groaned and rattled above the window behind him. The temperature gauge on the wall was steady at 109 degrees Fahrenheit. The temperature outside was ten degrees higher.

“This hellish heat makes me irritable and bloated,” he said.

Lissa, his secretary, looked up from her keyboard. “How is Mrs. Brown?” she said in her husky voice. Lissa’s voile smock clung to her upper body. She was aware that the professor was getting an eyeful, but she was past caring; she could feel her brain simmering gently in the afternoon heat.

“Irascible,” he replied, “and acting weird.”

Lissa watched as a plump bluebottle meandered idly across the room before diving headlong into the Zappomatic. The machine fizzled, and the fly was gone.

“She’s building a nest in the garage,” he said, wiping the sweat from his eyebrows.

“That is a little unusual,” Lissa said…