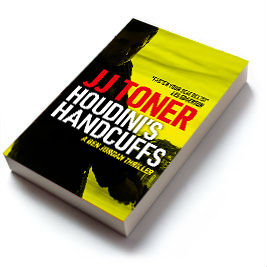 Green and yellow bunting strung between the lampposts marked out the route of the upcoming parade, as Detective Inspector Jordan headed across Dublin. It was 5 am. The streets of the city were deserted, the sky overcast and dark. Seven hours from now, tens of thousands of people of all ages would pack the streets behind crowd control barriers, clamouring for the best vantage points.

The traffic lights brought him to a halt on Leeson Street Bridge. His gun was cutting into his ribcage. He tried loosening the holster strap and repositioning the seatbelt; no improvement. He removed the gun and placed it on the passenger seat beside him.

Jordan turned west along the canal, a rose-coloured hint of dawn in his rear-view mirror. A playful breeze rippling through the reeds of the canal might have been the ghost of the saint on the lookout for fugitive snakes.

He hit the motorway heading south and increased the juice. As the powerful car surged forward, Superintendent Allen’s pasty face invaded his thoughts. The Super was a hard taskmaster, and it was sometimes difficult to understand his decisions, but getting Gannon to testify against Lafferty was Allen’s idea, and Gannon’s testimony was going to finish Lafferty, no question about it.

Memories of St Patrick’s Days long past seeped into his consciousness, and he picked through them like old gobstoppers rediscovered in the lining of a coat. Lucy in her Brownies uniform or dressed as a fairy, a butterfly, a cucumber!

Within sight of Kilkenny, he lifted his phone and dialled Sergeant Silver.

“Cavalry’s on its way, Isaac.”

“Just coming into the town. How’s our star witness?”

“Sleeping like a baby, thank God.” Silver yawned. “He’s an irritating little shit when he’s awake. Bent my ear most of the night about how he’s testifying against Lafferty out of the goodness of his heart.”

“Tell me about it. These twelve-hour shifts are killing me.”

Silver said, “Hold on a minute, Ben, there’s someone at the door.”

Jordan shouted into the phone, “Isaac! Don’t open it!”