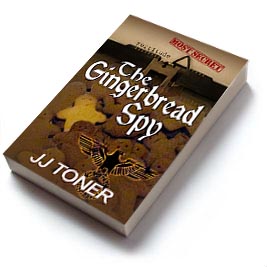 Kurt shivered in his leather jacket as he turned into Perrymead Street. Only one in every three of the street lamps in Fulham was lit. Blanketed in a thick London fog, everything looked grey – the lamp posts, the houses, the trees. Even the black cars appeared grey, sliding in and out of the pools of shimmering lamplight. Distant foghorns sounded from the river, while seagulls cried overhead, like the voices of dead children.

He picked up a copy of the Daily Mirror from the newsagents, before following the stubs of the iron railings to number 12. He lifted the doorknocker.
Harry Locke, the elderly guard, opened the door immediately. “That’s quite a peasouper, sir.”
Kurt stepped inside, and Harry closed the door.

Harry grinned toothlessly. “He’s in the bathroom. Been in there for hours. I expect he’s trying to scrub the swastikas from his hairy arse.”
Kurt wasn’t in the humour for Harry’s wisecracks. That one wasn’t even original. Picking up on Kurt’s mood, the guard wiped the grin from his face. “The kettle’s on, sir.” He handed Kurt a brown envelope, sealed with wax, and returned to his station in the front parlour.

Kurt took a book and a paper pad from a shelf in the kitchen and placed them on the table with the newspaper. He made coffee with milk. There was sugar. He took a spoonful. Then he cut himself a slice of fresh bread and added a generous sheen of salted butter. He sat at the table, opened the envelope, and read the outgoing signal for the day from the Wireless Board of the Double Cross ‘Twenty’ Committee.

He found the code word for the day from the book – Gone With the Wind – and created the substitution matrix on his paper pad. Then he added Arnold’s Abwehr call-sign to the front of the signal and encoded it.

Arnold made an appearance at 7:30 dressed in his red silk dressing gown, holding a lighted cigarette between his thumb and middle finger. He was a German to his hair roots, and clearly considered himself a cut above everyone in Britain. He picked up the newspaper. Propping himself against the sink, he spoke in heavily accented English. “I don’t know why you buy this rubbish, Kevin. Are there no better newspapers out there?”

Arnold wore his lank hair swept across his forehead much like Hitler’s. He was ten years younger than his beloved Führer though, and sported a pencil moustache. The British had given him the working name of Arnold; his real name was Paul Hoffmeister. Kurt was pretty sure that everyone in this make-believe world had been given false names. Harry and Clarence, the two ancient guards, Hendriks the cleaner. He couldn’t even be sure that Partridge was the cook’s real name. Kurt went by the name Kevin O’Reilly.

Arnold’s one and only job was to transmit signals to the Abwehr in Hamburg. Kurt could have transmitted these himself, but Arnold’s handler in Hamburg would know the ‘fist’ of his agent, and would recognize any attempt at transmission by another operator. This fact alone was keeping the double agent alive. Forced to operate against his own government every day, his continued existence hung on his usefulness to the British war effort. As the spymaster, Tar Robertson, was fond of saying, ‘His coat hung on a shoogly peg’.

Kurt unlocked the door to the back parlour. He went inside, and switched on Arnold’s Telefunken r/t set.

It took a few minutes to warm up. Normally, Arnold would fill this waiting period with mindless chatter, but today he had little to say. He sucked on his cigarette and exhaled a cloud of smoke. “I swear the cook must be Irish. Today’s meal was a miserable pork stew. It was mostly vegetables.”

Kurt raised a questioning eyebrow. Mrs Partridge was pure cockney. Tapping his pencil impatiently on his pad, he sipped his coffee. Real coffee with sugar! Arnold was better fed than most Londoners.