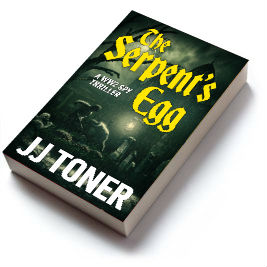 Anna Weber completed her end-of-day chores in the food court at the department store, and punched her card. Stepping out through the main door, she merged with the Berlin crowds headed east into the wind and rain.

The Brandenburger Brauhaus in Kurfürstenstrasss was packed, ancient wood-paneled walls on all sides throbbing under a roar of speech and laughter. She looked at the crowd in bewilderment. How could she find him among this multitude? She needn’t have worried. Max materialized from the throng like a magician, gripping a glass of beer.

He embraced her with his free arm and shouted in her ear. “What can I get you to drink?”

She tapped her watch. “There’s no time.”

“You have time for a small one.”

Before she could object again he handed her his half-finished drink and disappeared back into the crowd. Anna sipped Max’s beer while she waited. The clock on the wall was five minutes fast, but still she watched nervously as it edged toward 6:15.

The wall clock showed 6:24 by the time Max re-emerged from the crowd, carrying a half-glass. She frowned at him and tapped her watch again.

She held onto Max’s glass, lifting it to her lips. Max downed the half-liter in one long gulp. Max could drink for the Fatherland. If ever they made beer drinking an Olympic sport, he would surely win the gold medal! She set Max’s glass on a shelf. He picked it up, finished it and wiped his mouth with the back of his hand. Then he linked her arm and they hurried from the beer cellar.

Madam Krauss had rooms in a townhouse a few doors from the Brauhaus. It wasn’t far, but the rain had turned to a downpour. They ducked into Madam Krauss’s porch, shaking the worst of the water from their coats. Max reached for the knocker, but before he could lift it, the door opened and an officer in a Wehrmacht uniform emerged. The collar of his greatcoat was turned up, and he lifted his hat to his head as he brushed past, keeping his face hidden from them.

They stepped inside to a hallway with a steep staircase, the walls adorned with striped wallpaper from an earlier century. The Führer frowned at them from a picture on one wall. A thin odor of damp straw filled Anna’s nostrils. Not an unpleasant smell, it reminded her of the stables in Dresden where she used to take riding lessons as a child. She sneezed.

The cracked voice of an old woman emanated from a parlor beyond the staircase. “In here, children.”