I’m with Karen Baney, indie author of four books so far, and counting.

JJ: Tell us a little about yourself and why you’re participating in the SUPPORT THE TROOPS AUTHORS Group. 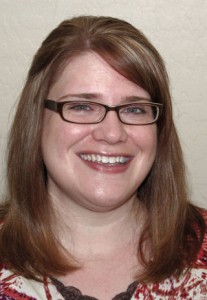 Karen: I don’t exactly know when my love affair with the US Military began. Perhaps it was as a young girl when my sister and I spent hours studying the Air Force ranks in volume “A” of the encyclopedia set my parents purchased. Maybe the detailed stories we invented planted a seed.
Regardless, at the age of 21, I found myself married to a military man and suddenly thrust into an entirely different culture and country. After two years and much heartache, I left a bad situation, but my love for our military survived. Even my second husband served our country for eight years, though I met him long after he became a civilian again.
JJ: Describe your book.
Karen: My latest book, Nickels, is a contemporary novel, set in the Phoenix Metro Area of Arizona. Niki Turner is a software engineer who finds herself on a project with someone from her past—Kyle Jacobs. Both Niki and Kyle went to high school together on Ramstein Air Force Base in Germany. 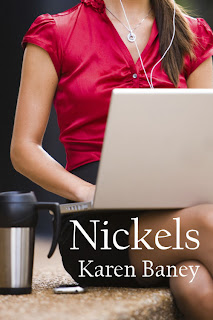 They have very different memories of that time in their lives. Kyle thinks he was being cute by picking on Niki. He was just trying to get her attention. In Niki’s mind his efforts came across more like torture. She remembered in particular a time where he threw her into the pool in swim class, only she didn’t know how to swim.
Both characters have gone through much heartache in the eight years since they’ve seen each other. Niki has lost someone close to her. Kyle lost his entire CSAR team in a horrible accident that left him both physically and emotionally scarred.
When they are thrust onto the same project at a helicopter avionics manufacturer, the tension is palpable. Kyle hopes Niki can see him as the man he has become. She just wants to avoid him at all cost. Only one more problem – he’s her roommate’s brother and seems to keep showing up at her house at all hours.
JJ: Where did the idea for the book come from?
Karen: There’s a lot of me in this book. It’s a little scary to admit. As one close friend said, “Oh, I thought Niki was you.” Niki shares some similarities, but in some ways she’s very different from me too.
I’m a software engineer. There are so few women in this career field that it presents an interesting challenge at times. I thought it would be fun to show the world a glimpse of the camaraderie that exists between programmers.
I also spent two years in Germany, so when I decided to include a lot of different aspects of the military life, I didn’t have to go far for ideas.
JJ: Give us a short exclusive excerpt – a piece that won’t be seen in the sample. (Introduce the characters first, if need be)
Karen: Kyle Jacobs is the male role in the novel. Just prior to this scene he’d been flirting with Niki in the pool by getting in a splashing contest. When she stared as his scars, he got mad and left. Inside the house his sister, Marcy is getting ready for their Memorial Day BBQ party.
~~~~~~~~~~~~~~~
Kyle glanced over his shoulder at the sharp intake of her breath. Niki had seen the scars. All of them. The ones on his chest and arms. The surgical scars running up his back. Even he hadn’t been able to see the full extent of those. Judging from her reaction, they were as bad as he thought.
“Stop staring,” he growled as he opened the sliding glass door and stalked through.
“What’s got you in a bad mood?” Marcy asked, looking up from salad fixings she chopped.
He whirled around to face her. Raising his hands, he motioned across his chest. “These. And those.” He hooked a thumb over his shoulder as he turned his back to face her.
Her mouth slacked open.
This is why he was careful to hide his torso at all times. He didn’t know what he had been thinking, trying to play in the pool without a shirt on. He hated his disfigured body. How could he expect any woman not to be repulsed by it. His perfect physique died in that helicopter crash. And it made him feel like less of a man.
“I think you’re overreacting.”
“Am I? Have you taken a good look?”
“Yes. That’s why I think you’re crazy. The scars aren’t that bad. You’re still an attractive man—with a few imperfections.”
“A few? Look at this!” Again he motioned his hand over his chest. Was his sister completely blind?
“Yes, a few. You’re obsessing.”
“Am I? How well do you think Niki reacted to them?”
“I don’t know.” Marcy stood on her tip toes to peer around him through the sliding glass door. “She doesn’t look horrified or anything.”
JJ: Have you written / published other books?
Karen: Yes. I have three other books, all available to the troops. They are all set in Arizona in the mid to late 1860’s when the territory was first formed. 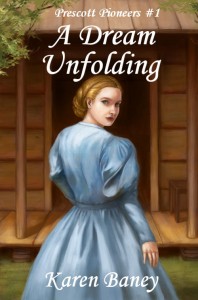 A Dream Unfolding follows the lives of two different families as they encounter many dangers on the trip west to their new home. Eventually the two stories merge in the brand new town of Prescott, Arizona.
A Heart Renewed follows Julia Colter’s flight for her life as she heads to Arizona to the safety of her brother’s ranch.
A Life Restored is about Caroline Larson. When the stage coach she is on is robbed and everyone but her gets murdered, she must survive in the desert. An express rider, Thomas Anderson, comes along and becomes her reluctant hero. Sparks fly as he escorts her safely to Prescott. 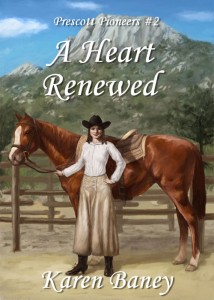 JJ: What are you working on?
Karen: My current project is the conclusion of the Prescott Pioneers Series: A Hope Revealed. Then I have two more contemporary stories planned before stepping back in time to WWII. Just don’t hold me to that order. I’m getting really excited about all the WWII research so those could end up coming before (or in between) the contemporary stories. 🙂
JJ: If you were stuck on a desert island, what one person, living or dead, would you like to find there?
Karen: Ok, I know it sounds corny, but I’d really like my hubby to be there. We’ve been married, very happily, for eleven years and I really can’t imagine being stranded apart from him.
Hopefully there’s no weird stuff happening on the island like on Lost.
If I got to have more than one person with me? Tom Hanks. I’m pretty sure he could find a way to make us raft to get off the island. 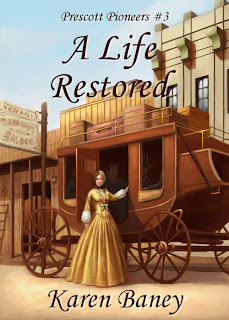