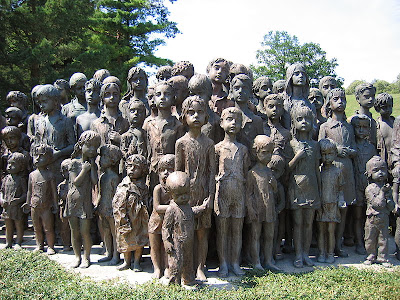 On September 27 1941 Reinhard Heydrich was appointed Deputy Reich Protector (effectively governor) of Bohemia and Moravia. On May 27, 1942, two members of the Czech partisans attacked Reinhard Heydrich as he was driving to work in his car in Prague. Their gun jammed, but they managed to explode a grenade in or near the car. Heydrich was wounded. He and his driver chased the assassins, but they got away.
Heydrich was taken to hospital. For a few days, he seemed to recover, but his wound was infected by horsehair from the seat of his car and he died of septicemia on June 4.
The assassins evaded capture for a time, but were eventually cornered in the crypt of a Christian Orthodox church. They took their own lives rather than surrender to the Gestapo.
Following the orders of Adolf Hitler, a Czech village was chosen more or less at random and leveled in reprisal. The village of Lidice was chosen. All the men aged 16 and over were massacred. The children were separated from their mothers. The women were shipped off to concentration camps. After a few days, most of the children (82) were executed by gassing.
A few days later another, smaller village, called Lezaky, met a similar fate when a radio transmitter was discovered there.
In all, an estimated 1,300 people died in direct retaliation for the assassination. In Lidice, all the animals were killed as well, and even the bodies of long-dead villagers were dug up and destroyed.
The picture shows a moving memorial to the 82 lost children of Lidice. Erected in the 1990s, it is the work of Marie Uchytilová.
The Assassination of Heydrich is central to The Black Orchestra. The massacre at Lidice is mentioned in the sequel, The Wings of the Eagle to be released on January 8, 2014.
I cannot tell you how moved I am by this terrible story. A copy of the picture of the memorial is now a permanent feature on this blog.
Details and photo from Wikipedia