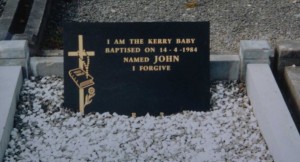 In 1983 the body of a newborn baby boy was discovered on a beach in Cahersiveen, Co Kerry. The baby had been stabbed several times. A fertiliser bag was found nearby. The police began a search for the mother and quickly identified a potential suspect in Joanne Hayes, a young unmarried woman living on a farm in Abbeydorney.

Joanne had been having a long term affair with a married man, Jeremiah Locke. She had already had a miscarriage and given birth to a daughter. Locke and his wife already had one child and were expecting a second.

Living on the farm with Joanne, was her sister, her two brothers, her mother, and her aunt. The Murder Squad, an elite detective team from Dublin, descended on the county town of Tralee and began to interrogate every member of the Hayes family.

Joanne explained that she had given birth to a baby who died within minutes, and that she had placed the body of her baby in a ditch on the farm. The police searched for this baby and found nothing. The interrogations continued.

Within days ever member of the Hayes family had given statements to the police supporting their theory that Joanne had given birth to a healthy baby boy and stabbed it to death, and that her brothers had wrapped the body in a fertiliser bag, taken it to Slea Head, Dingle, in their car and dropped it off a cliff into the sea. The theory was that the currents had carried the dead baby from Slea Head to the beach in Cahersiveen, even though this was completely counter to the normal direction of the currents in the area.

At that point the baby that Joanne said she had placed in the ditch on the farm was discovered by her sister. Faced with two dead babies, the Murder Squad came up with a new astonishing theory, called superfecundation, that Joanne had conceived twins by two different men, even though the Cahersiveen baby’s blood type (A) was inconsistent with Joanne as its mother or Locke as the father, both of whom had blood type O. The baby in the ditch had blood type O.

Joanne was charged with the murder of the Cahersiveen baby, but the case was immediately thrown out by the Director of Public Prosecutions.

In 1984 a Tribunal of Enquiry was established to discover how so many members of the Hayes family had signed detailed – but inconsistent – statements supporting a police theory that was patently false. The tribunal fell far short of its terms of reference, ignoring the primary question and concentrating instead on investigating the case. The result was that Joanne and the Hayes family were effectively subjected to the trial process that the DPP had dismissed.

Within a year, the Dublin Murder Squad was disbanded. The case of the baby on the beach remains unsolved.

Source: The Kerry Babies Case: A Woman To Blame by Nell McCafferty