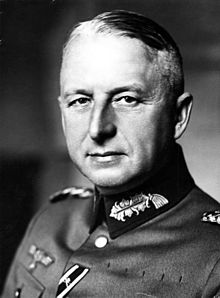 While writing my WW2 books, I had to come up with names for various characters, Gestapo men, members of the SS and so on. It was important to give these Nazis appropriate names. My editor objected to the name Stein that I had selected for one of the characters in the second book. She said the name was Jewish, as in Einstein, Bernstein etc. I investigated names ending in “stein” and discovered one of Hitler’s best generals.

Generalfeldmarschall Erich von Manstein was born in Berlin in 1887. His birth name was Fritz Erich von Lewinski, his father a Prussian aristocrat and artillery general from a long line of military commanders. He was adopted at an early age by his mother’s sister, who was unable to have children. His adoptive father was another Prussian General: Georg von Manstein.

To say that von Manstein was born into a military family would be an understatement. His birth family positively bristled with military officers, mostly generals, on both sides. Generalfeldmarschall Paul von Hindenburg, who was President of Germany from 1925 until his death in 1934, was his uncle.

His military training was interrupted by the outbreak of the Great War in 1914, and he served with distinction in that war, rising to the rank of Hauptmann (Captain).  Between the wars he helped with the secret rebuilding of the German army (in contravention of the terms of the Treaty of Versailles) and was promoted several times. By the outbreak of WW2 in 1939, he had attained the rank of Generalleutnant serving as Chief of Staff to Army Group South.

His was the decisive input to the invasion plan for France, Belgium and Holland, the lightning thrust through the forests of the Ardennes that cut off the British and French armies in Belgium and Flanders.

In 1940, now a full general, he was actively involved in drawing up Operation Sealion, the plan for the invasion of Britain. This plan was postponed indefinitely in October of that year, although von Manstein insisted that it was a vital step to ensure ultimate victory.

Von Manstein went on to serve with distinction in Russia, where he led the successful third battle of Kharkov in March 1943, and in the Crimea.

He was tried and found guilty of nine war crimes indictments in Nuremburg in 1949, serving only three years of a 12 year sentence. Winston Churchill amongst many others campaigned for his early release.

To this day, the extent of Von Manstein’s knowledge of and responsibility for the killing of Jewish partisans and Russian prisoners of war, and his attitude towards the Jews are subjects of debate. It seems unlikely that had little or no knowledge of the atrocities of the Einsatzgruppen (SS death squads) operating under his command, as he claimed at his trial. And his anti-Semitism was generally well known during his active war years, although he often joked about the Jewish blood in his own family.

Sign up to be notified of JJ Toner’s future articles
3829 Total Views 3 Views Today
The Kerry Babies - How a Murder Squad Lost the Plot
Book Review - An Officer and a Spy by Robert Harris
Posted in ALL, WW2 and tagged German Generals, WW2.