If the German WW2 intelligence machinery was a complicated maze of competing agencies, British Intelligence was every bit as bewildering. We’ve all heard of MI5 and MI6, but Military Intelligence in the war years included the following:

Just to give you a flavour of the complicated behind-the-scenes machinations involved, the SOE was formed in mid-1940 by merging three pre-existing organisations: Department EH, a propaganda group of the Foreign Office, Section D of the SIS, set up to use sabotage, propaganda and other methods of “irregular warfare”, and a Foreign Office guerrilla warfare unit called MI(R). 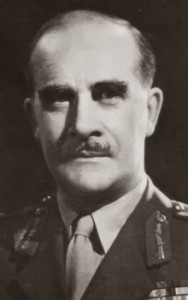 At its inception, the SOE consisted of two departments, SO1 Propaganda and SO2 Operations, but in 1941 SO1 was removed and became an independent organisation, the Political Warfare Executive (PWE). With all its attention thus directed toward covert operations, the SOE undertook many sabotage missions and activities in support of resistance movements in various European countries. It was the SOE that supported the Czechs in operation Anthropoid, the assassination of Reinhard Heydrich in Prague in 1942.
The leadership of the SOE devolved to Major General Colin Gubbins (pictured) from August 1943. He rebuilt and refocused the organisation, applying lessons learned from the IRA during the Irish War of Independence.

Operation Anthropoid is a pivotal element in The Black Orchestra.

MI14 and MI19 feature in The Wings of the Eagle.