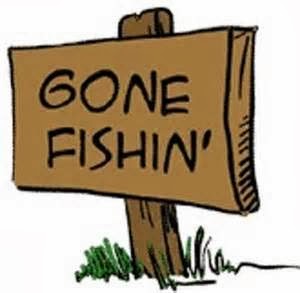 I admit it – I’ve been bone idle for a whole month. Ever since I launched The Wings of the Eagle on January 8, I’ve been on a really long lunch break, sitting around the house, reading, watching TV, feeding the birds, playing patience on the computer, or fiddling about on Facebook or twitter.

I now have 4 thrillers and a book of short stories on Amazon kindle. The first 2 thrillers are set in 2004 and feature DI Ben Jordan, the other 2 are historical fiction set in Germany during World War 2. The Ben Jordan books could be selling a lot better and I’ve been looking into maybe redesigning the covers. I’ve also been thinking about having all four novels translated into other languages, starting with Spanish. And I’ve been working with a web designer on a new version of my web site.
I like to think I’m a writer, but writers write, and apart from the odd blog, I’ve written nothing since mid-January. Mentally, I’ve gone fishin’ for a whole month.
My wife’s travelling to Australia for two months April-May and I plan to use that time to do some serious writing. The problem is I don’t know what I should write next.
Here are my options:
1. A third Ben Jordan book. [Could be flogging a dead horse.]
2. Another in The Black Orchestra series of WW2 books. These have been quite well-received. I could expect a reasonable return on a third in the series.
3. I have 30,000 words of a young adult dystopian book that I planned as a trilogy. It needs a complete rewrite, but some of what I have could be retained. Maybe.
4. I have a completely new novel in my head, a stand alone book about hero worship, betrayal and redemption. I envision this as a literary novel, a step up from all that I’ve done so far.
5. I have a completed medieval mystery that needs a minor edit/rewrite.
6. I have hundreds of short stories that I could package and publish. [Probably another dead horse.]
Option 2 would probably generate the best return; option 3 (the trilogy) represents at least 2 years’ work.
So, how would you choose?

Bear in mind my advanced age. Whatever I choose could be my last foray into the field of self-publishing.