On Thursday, I needed to go into town. I intended to do a few small jobs on my computer first, but nothing seemed to work. Everything I attempted failed, although the software was all working perfectly, as far as I could tell. Eventually I discovered what the problem was: My mouse had lost its click.

Armed with a fully charged kindle, locked and loaded with Les Edgerton’s wonderful book Just Like That, I headed into town on the train.

I spotted this character at the bottom of Grafton Street, and managed to keep him in my sights long enough to take his picture. 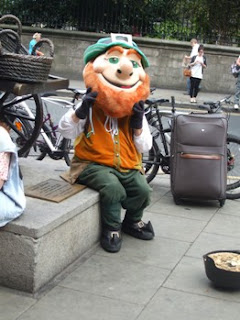 He was the biggest leprechaun that I’ve ever seen. I spoke to him politely, but got no response. I think maybe he only understood ancient Irish.

Then I blinked and he was gone, taking his crock of gold with him!

When I got home, my mouse had rediscovered her lost click, and the next day a fairy ring of tiny toadstools sprang up, encircling a beech tree that I planted in the garden exactly ten years ago. I swear this fairy ring wasn’t there when I left the house on Thursday morning. Here’s a picture of the tree with its fairy ring. 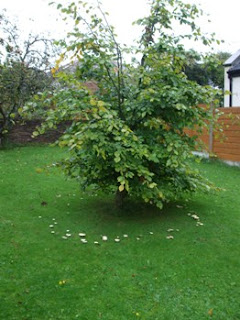 I feel sure my luck is about to change, but will it change for the worse or for the better?

5 thoughts on “A Lucky Day”